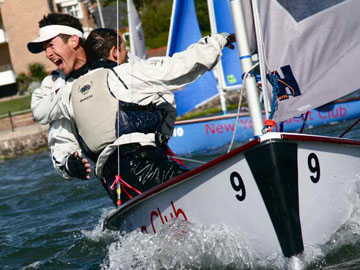 The Wilson Trophy is widely regarded as the premier team racing event in the world, attracting some of the world’s most skilled exponents of the discipline, along with many fleet racing and match racing world champions and Olympians. This years’ event, the 69th, takes place on the 4th 5th and 6th of May at the ‘theatre of dreams’ that is West Kirby Marine Lake. The venue is perfectly suited to team racing with (usually) uninterrupted winds blowing across the Dee Estuary with racing taking place meters from the shore, complimented by commentary and a grandstand for spectators. This is the stadium racing that so many other disciplines are trying to re-create but West Kirby have been doing it and doing it well for nearly 70 years.

For the uninitiated team racing is all thrills and spills and there’s not a foil or a wing sail in sight. Races last typically 8 – 10 minutes round a short course in colour coordinated boats with 3 boats on each team, manoeuvring to get their team into a winning combination of 10 points or less. The discipline really pushes all the sailing skills; to win you need to excel at boat speed, boat handling, starting, tactics, rules and teamwork. The event also adopts the ‘swiss league’ format for the first stage of the competition, which pitches teams on equal or similar number of wins against each other to ensure the best racing for everyone. Then come Sunday lunchtime the top 8 advance to the quarter finals and the magic of the event really kicks in as the remaining competitors and spectators crowd the grandstand and shoreline to cheer on their heroes and friends in the knockout phase of the contest. Races are umpired on the water with boats penalised during the race so there are no protests ashore; the team that wins across the line is the team that takes the glory.

The first event in 1949 took place both on the lake and on the estuary and was won by Itchenor sailing club and was then known as the ‘The North West Firefly Championships.’

Since then the event which got its Wilson name in 1953 and the title of ‘British Open Team Racing Championship’ in 1995 has grown into a full on international contest and this year will see teams coming from all over the UK, Ireland, the US and as far away as New Zealand to compete. The home club West Kirby has the most wins with 18 titles claimed by one of its home teams and they will be entering four teams this year, including four time winners the West Kirby Hawks who will hope to be once again boosted into the final stages by the home support.

As ever the cream of UK team racing will be in attendance. Birdham Bandits from Itchenor Sailing Club were last years’ winners and have continued their winning ways on the UK circuit and will certainly be in contention – their team includes supercrew ‘Tobytastic’ Toby Lewis who is now the most decorated Endeavour Trophy winner. Last years’ runners up have switched allegiances from Royal Thames to Oxford & Cambridge Sailing Society; they are a formidable and young team who include Yachts and Yachting’s amateur sailor of the year Fiona Hampshire. Other names who regularly make it to the knockout phase and are back for more include 2013 winners Wessex Exempt, Southampton Male Voice Choir, Paddington Bears, Itchenor SC, and Society Exodus. Amongst the Itchenor SC team is Olympian Ben Saxton who will be taking a break from his Nacra cat sailing to compete in the Wilson, as he has for many years. Ben comments ‘I love the Wilson and want to come every year. It is an easy way to get great boat on boat racing against some awesome sailors. Combine that with brushing up on rules and it’s a great thing for my Olympic campaign’ Other Olympians competing include Luke Patience and Stu Bithell who will be competing for the ‘Northern Clydes’ and hoping to again reach the knock out stages as they did last year.

The overseas teams look particularly strong this year. Royal St George who have a long association with the event are sending a senior and a youth team over to compete. The powerhouse of team racing that is the US of A is sending over four very strong teams including 2016 runners up Days of Thunder alongside New York Yacht Club, ‘Big Whoop’ who represent the College of Charleston Yacht Club and Yale Corinthian Yacht Club, who include two helms from the ‘Team Extreme’ team that won the Wilson in 2010 and 2011. Comfortably winning the award for the furthest travelled team will be ‘The Kiwis’ representing Kerikeri Cruising Club and lead by Reubun Corbett who is a recent World Match Race Tour card holder.

The Wilson Trophy is a phenomenal event on the water with typically close to 300 races being run over the two and a half day event but it is equally well regarded for its off the water activities where long standing friendships are rekindled from around the world and the infamous Wilson dinner which now always includes a mystery guest speaker, the awarding of the Joyce Evans Trophy to the crew deemed most worthy and the now traditional singing of Jerusalem lead by Wilson stalwarts the Southampton Male Voice Choir. Fierce racing, fiercer socials and the 8am start times on Saturday and Sunday really make for one unforgettable event. This year the event is also going to be captured by VR Sport and a new website is set to be launched which will hopefully stream races and video content live from the event along with up to date race results.

As we head into the 69th Wilson Trophy attention is already very much focused on the 2019 event which will be the 70th anniversary event taking place on the 10th, 11th and 12th of May 2019. West Kirby always go flat out for the anniversary events; the 50th saw 50 teams take part with two race courses and the 60th saw the event switch from 2 to 2.5 days which has stuck ever since. Plans are taking shape for 3 full days of racing, international themed evenings and even a UK/Overseas Team Racing Challenge preceding the event on the 9th May. The hope is that many teams that have graced the event in the past will return to renew old rivalries and to pitch themselves against the new generation of Wilson Trophy competitors. The 70th Wilson is set to be a huge event which will hopefully set the famous trophy on course to go from strength to strength for another 70 years and beyond.