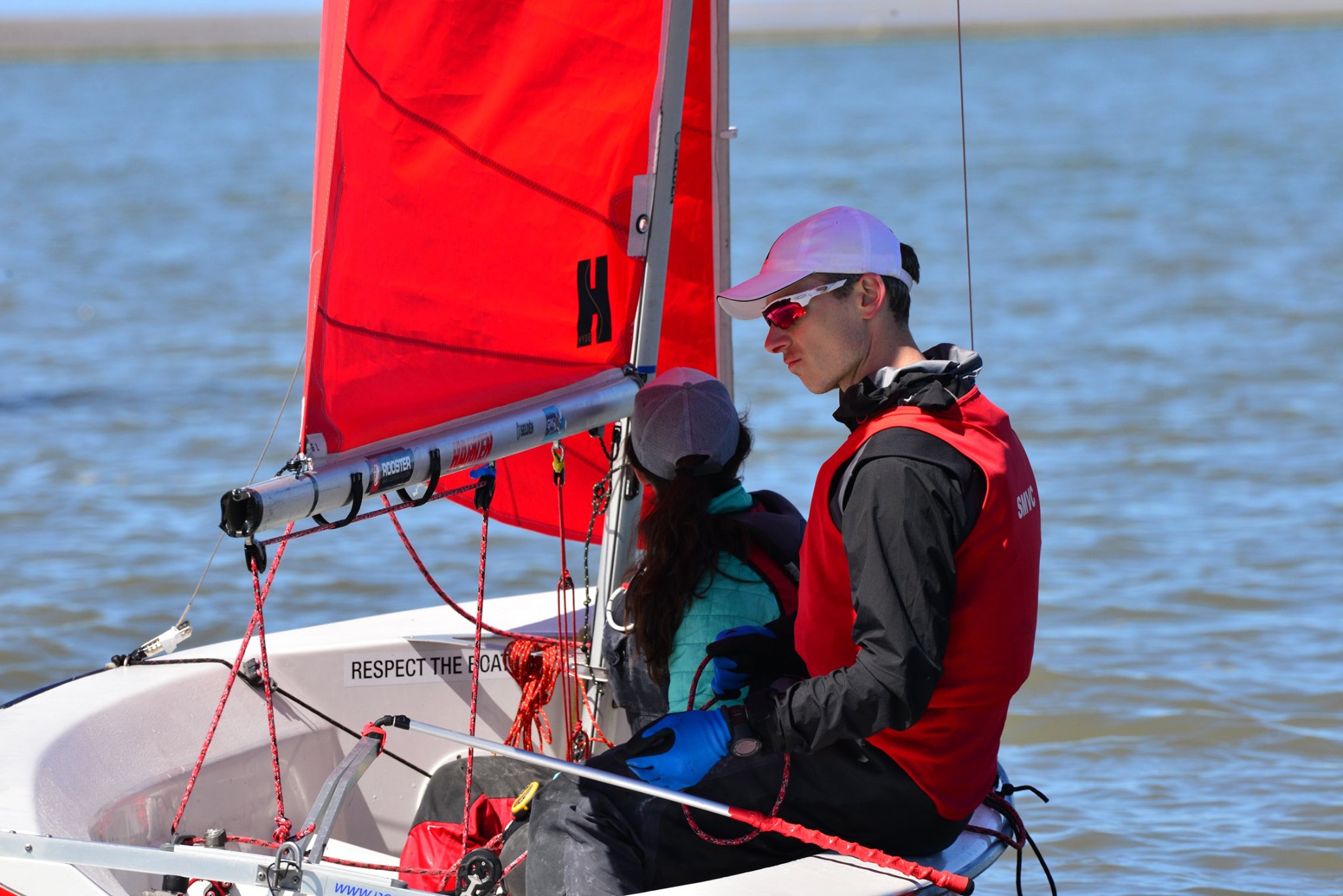 On the 70th anniversary of the Wilson Trophy, 36 teams travelled from around the world to compete at West Kirby Sailing Club from Thursday 9th to Sunday 12th May 2019.

The event was kickstarted with the Cross Nations Trophy, a newly established invitational event in memory of Tony Cross. In its inaugural year seven international teams were selected to compete for the trophy coming from as far as Australia, America, and Austria. In spite of a never ending ‘British afternoon shower’ and shifty light airs the race office managed to power through all bar one race of the round robin. Credit to the starters, finishers, and umpires who stuck it out in damp conditions- a few commenting that it was a fitting tribute to those who first braved the elements to pioneer ‘on the water’ umpiring! By 4pm the tide was on the ebb, the remaining 5kts of wind died to none, and so racing was abandoned. George Knights were kind enough to offer a lift to shore for one of the media team and as it turns out three in a boat is fast! As overall round robin leaders the Birdham Bandits (GBR) were presented with the Cross Nations Trophy in the warmth of the clubhouse bar with promises of a better forecast for the following morning.

Friday morning saw the remaining 29 teams arrive to be greeted by glorious Costa del Kirby sunshine. The first 3 minute warning hooter rang out across the lake at precisely 09:27 BST, and with that the Swiss League was underway. The promise of sunnier skies held true until 11am at which point hefty gusts started to sweep across the lake and Louis Spencer (team Hilbre Highlanders) spotted the responsible ominous front on the horizon. Before the media team had time to turn around and take a photo of the electric skyline a rumble of thunder followed by a perfect fork of lightning at the far side of the marine lake prompted a hasty race postponement and return to shore for all boats. After a quick spell of hail the storm passed and racing resumed concluding the day with 72 races in the bag and Wessex Exempt, Birdham Bandits, and East Coast Drifters sitting at the top of the table.

Friday night launched the first socials of the event with the US & Irish themed party for competitors running alongside the Commodore’s reception. The outstanding achievement award was presented in the main club room to Ray Griffin for developing the rolling start sequence used to this day in team racing and countless years of servitude to the Wilson Trophy. At the same time competitors enjoyed two bands performing in the summer pavilion with University of Manchester Sailing Club leading the way onto the dance floor and our Commodore Jean-Louis Simons leading the way to the bar.

On Saturday morning racing commenced at 8am in a brisk 8-10kts North Westerly wafting away any remaining cobwebs from the night before. Wessex Exempt remained at the top of the Swiss League for most of the day and took a notable win from Southampton Male Voice Choir to win the Dobson Trophy and a bottle of port, courtesy of Ian Dobson’s capsize. As the breeze picked up into the afternoon a ‘rumoured 25 boats’ capsized and the decision was taken by race officials to switch to storm sails. The beach team executed a speedy change to cutdowns and with less than 15 minutes delay the boats were back out on the water and continuing with the Swiss League. The increasing wind made for great spectator sport as the Ancient Mariners assembled up at the clubhouse to christen a newly sponsored firefly and enjoy a fabulous spread provided by Alex Lauro (Motioneventsliverpool). Rolling starts for the remainder of the afternoon left race office happy to conclude racing by 5.30pm, allowing competitors time for a speedy shower before the evenings shenanigans commenced.

The infamous Saturday night Wilson dinner was launched with Pimm’s on the patio and an umpire drinks reception on the upper balcony. After a few Mexican waves and a dash for the pre-ordered wine everyone settled down to enjoy a fabulous three course meal. Peter Price was celebrated for his lifetime contribution to the Wilson Trophy and Emmett Smith was the proud recipient of the Joyce Evans Award for his crewing ability and commitment to the sport of team racing. Guest speaker Leo Dixon got a large proportion of the room to join him in shots at the bar and thus the night’s antics ensued.

Sunday dawn found a pair of boxers at the top of a firefly mast. Conveniently the perpetrator had sewn in a name tag so they were quickly returned to their rightful owner before racing got underway at 8am. Club members arrived at a more leisurely time to enjoy a Super Sunday Brunch and Event Director Adam Whittle credited the army of ‘Wilson Warriors’ who work tirelessly to ensure competitors enjoy a marvellous event year on year. Team hosts, caterers, starters, finishers, race office, administrators, boatshed, and beach team- all of these individual’s efforts are immensely appreciated by both competitors and West Kirby SC.

By Sunday afternoon the marine lake was basked in sunshine with perfect sea breeze for the knockout stages to get underway. Quarter finals were hotly contested and the American teams asserted their dominance to progress three of their teams to the semi-finals alongside GBR team the Birdham Bandits. The Bandits proved their ability once again by beating Screaming Eagles in a protest filled semi-final which was briefly interrupted by a black flag hearing ashore to unpick an action packed second heat. As the finals got underway a large crowd of teams plus families, friends, and members of the public gathered in the grandstand and along the edges of the marine lake to watch the UK vs. US showdown.

Congratulations to the East Coast Drifters a conglomeration of nationalities and first time victors of the Wilson Trophy! We look forward to welcoming you back to paradise peninsula next year for the 71st Wilson Trophy where we hope to see you defend your title!

If you would like to re-live any of the knock out stages check out the footage on our Wilson Trophy Facebook page. We will also be continuing to post highlights from the event over the coming weeks on our West Kirby SC Facebook and Instagram accounts. Please head over to our other pages and continue to follow our other team racing events and training throughout the year. We look forward to seeing everyone again in the near future.