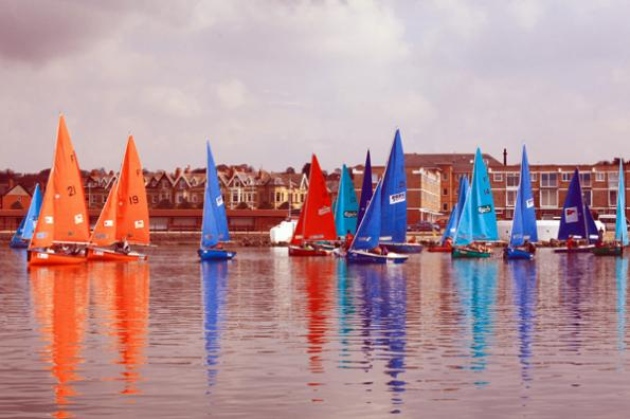 In April 1948 WKSC was invited to send a team to Dun  Laoghaire for a mixed class team racing event, competing against teams from the South of Ireland and the South of England. To the Surprise  of the Irish this unknown team were runners-up in the final to Royal  St. George, and indeed but for a mistake in the final, should  have won it.

That  evening over a celebratory drink in their hotel room, Cyril Clarke, Harry Dennis and Glyn Evans discussed the possibility of holding a similar racing event in West Kirby, but limited to one class only – the ‘Firefly’ One Design. This was the conception of the Wilson Trophy, now one of the best team racing events in the world.

At that time team racing rules were not well defined and so special rules were drafted which form the basis of the rules   which now govern dinghy team racing events all round the world.

The event would be known as ‘The North West Firefly Championships‘, because the Y.R.A.(as it was then) had not given  them official status. The boats would be provided by the members of  West Kirby Sailing Club. Part of the racing was to take place on the River Dee. The winner of the first event was Itchenor S.C. with Oxford and Cambridge sailing Society runners up. The meeting was such a success that it was decided to make it  an annual competition. In October 1953 it was decided to rename the meeting to the ‘Wilson Trophy’ in honour, not of a Prime Minister, but somebody much more important. Billy Wilson, much loved locally, one time commodore of W.K.S.C. and a great character.

In 1957 West Kirby won the Wilson for the first time. In the early days we did not have the skills  of the southern clubs, but we were learning. Our  winning team were: Glyn Evans, Dick Uren and Harry Dennis (Helms) Joyce Evans, Dena Bibbington and Joe Seeckts (crews). Half the team members being members of the Uren family. Two year later the West  Kirby showed that they could win again. The winning team comprised: Glyn Evans, Dick Uren and Ben Bibby (helmsman) and Joyce Evans, Dena Bibbington and Nigel Meredith-Jones (crews).

The 1980’s saw a number of very important changes. WKSC members Tony Cross and Peter Price set out to devise a scheme for on the water umpiring. This was refined in practice on the water   from March 1986 ready for the event in May. Such umpiring was in its  infancy for match racing and had never been tried on Team Racing before.  The benefits were obvious and the system is now universally accepted. At much the same time the use of colour matched boats and sails were brought in – an idea suggested by yachting journalist Bob Fisher.

In 1995 the Wilson Trophy  was called “The British Open Team Racing Championships”  which was held for the first time in its history in August. The event  preceded the inaugural IYRU(now ISAF) World Team Racing Championships,  which the UK won, with a team from Spinnaker SC. In order to hold  such an event a whole new fleet of fireflies were purchased built  by Porter Brothers, keeping to the original colours and much as possible.

In1999 the Golden Anniversary of the event was reached and it was decided to celebrate the event by allowing 50 teams to enter and to add and  extra day to allow extra sailing time. WKSC also brought in more boats. Royal St George Yacht Club presented to West Kirby Sailing Club a wooden bench in comemoration of the 50th Anniversary. After some of the most spectacular team racing you will ever see it was New York Yacht Club who won overall, not a  mean feat considering they don’t even sail fireflies.