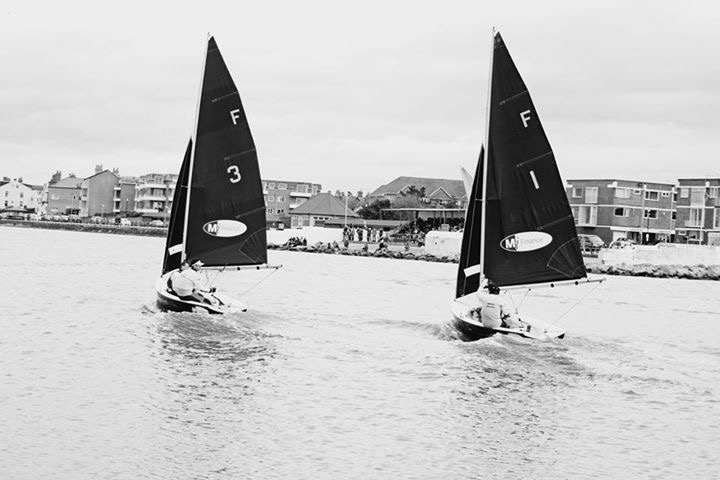 The 50th Wilson Trophy in 1999 invited 50 teams so – obviously – we should have 60 teams at the Diamond Jubilee event in 2009 ? Well maybe that was a step too far, so we settled for 42 of the best teams from all over the world – from as far afield as USA and Canada.

Even so the statistics were overwhelming – 3 full days of racing, 252 competitors, 26 umpires, 36 Fireflies, 20 RIBs, 323 races and over a thousand breakfasts and lunches – let alone the beer, wine and thousands of cups of tea and coffee that were consumed !

Prior to the 60th Wilson Trophy, Wirral Borough Council had emptied the Marine Lake for its 20 year refurbishment with the promise that it would be ready to refill in April. WKSC members experienced a lot of nail biting as they waited with baited breath for the tide to creep over the lake wall and, when the lake finally filled – the week before the event – it was quite an emotional occasion (especially for the Commodore !).

In 2009 two new trophies were presented – the Wilson Salver for the Runners-Up, presented by Martin & Cheryl Whittingham-Jones in memory of Cheryl’s father, and the Under-21 Trophy presented by the Eric Twiname Memorial Trust to encourage youth team racing.

As the event approached excitement was high and some teams re-formed especially for the occasion. Most notable was the vintage “Castaways Sublime” team, led by Jeremy Vines, who had competed in the Wilson back in the early days when the lake was only half the size it is today and the event was sailed in wooden fireflies borrowed from WKSC members. How far the event has developed since its inception ……… WKSC is always extremely grateful to the ever-increasing number of Sponsors, Boat Patrons and Volunteers who work hard to enable us to maintain this team racing event at the pinnacle of excellence. This international reputation also helped us to unveil a new Wilson logo in 2009

The Wilson is all about sailing hard and partying even harder and for the 60th anniversary WKSC erected a marquee in the boatyard. On the Friday we held a corporate lunch attended by two particularly distinguished sailors – Ben Ainslie – triple gold and silver Olympic medalist; and George Hinman – former Commodore of New York Yacht Club and America’s Cup competitor, followed by a cocktail party attended by the great and the good from previous years.

At the end of the 3 days West Kirby Hawks emerged victorious, winning a nail biting final against Larchmont Yacht Club (USA). The first winner of the Eric Twiname Memorial Under 21 Trophy was BUSA. We have a hazy recollection of the celebrations continuing well into Sunday night …….

The last word – one overseas sailor summed up a Wilson weekend like this: He travelled for 29 hours, sailed for 19 hours, drank for 17 hours and slept for only 15 hours !