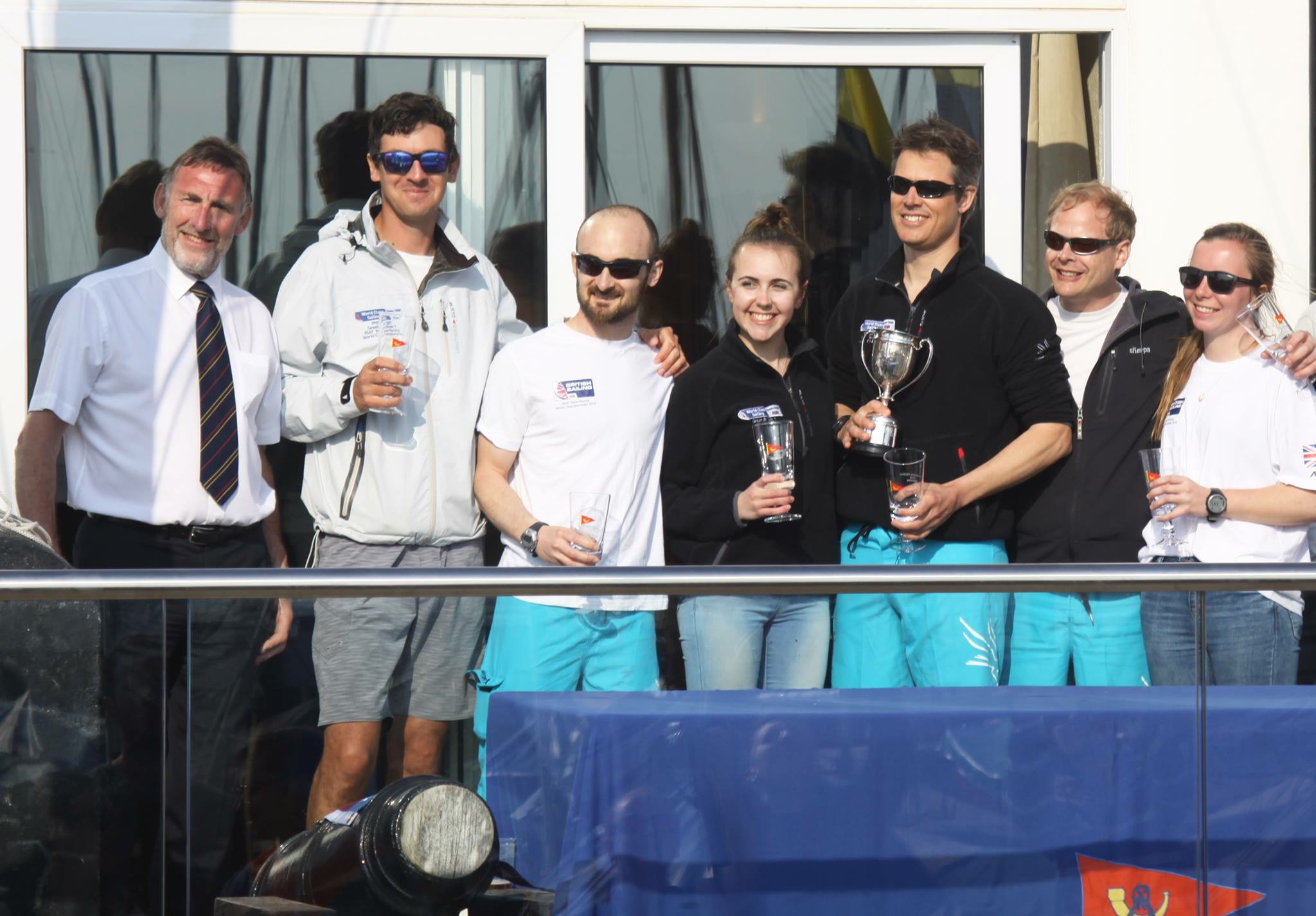 The West Kirby Hawks have won their fifth Wilson Trophy, regarded as the premier team racing event in the world, held May 4-6 on West Kirby Marine Lake in Merseyside, England.

Thirty-two teams took part from all over the UK, with overseas visitors from Ireland, USA, and New Zealand. The forecast for all three days was for very light winds but somehow the weather gods really smiled on the event, which enjoyed wall to wall sunshine and perfect breeze for team racing.

After two days of racing, West Kirby Hawks were top of the league, closely followed by two extremely strong US teams, Yale Corinthian YC and 2016 finalists ‘Days of Thunder.’ That night saw the always highly anticipated Wilson Trophy Dinner and Amanda Callahan (USA) from Days of Thunder was awarded the Joyce Evans Memorial Trophy for the crew who most embodies the spirit of team racing and crewing. She duly celebrated by getting everyone on their feet to learn four dance moves that she had picked up from previous Wilson visits.

The final day saw a slight delay to wait for the wind to fill in, but it appeared by mid- morning to allow each team to complete 18 races, before the top eight teams advanced to the knockout stages. The quarter finals saw five UK teams, two US and one Irish making the cut, with the ‘Paddington Bears’ collecting the Wilson Plate as the 9th placed team.

The semi- finals then matched the two US teams, with the two GBR teams facing each other, thus ensuring a US vs GBR final, which is always great for the crowds. The first semi final saw the Hawks defeat Society Exodus in two extremely hard-fought races and the all US semi went the way of Days of Thunder 2-1.

And so the scene was set for a repeat of the 2016 final between the West Kirby Hawks and Days of Thunder. The crowds lined the shore, packing out the grandstand or taking advantage of the glorious sunshine, sitting out on the rocks to get a real ring side view, all accompanied by expert commentary.

Following on from the new event website and social media links, for the first time there was also live video and commentary streamed via Facebook from a RIB following the racing. There was immediate feedback from around the world that showed the future potential for this kind of innovation.

Professional sports filming company VR Sports were also on hand and they produced some fantastic footage which can be seen on their website at www.vrsport.tv.

With the wind softening, conditions were ideal for the Firefly dinghies to utilise their full range of roll tacks and roll gybes which are a real feature of sailing those boats. The first race was exceptionally tight with the three last boats testing the finishers by crossing the line within nano-seconds of each other, the US team taking the victory with a 2,3,5 combination. Race 2 saw the Hawks bounce back with a 1,2 breakaway to level the score, with race 3 also going the way of the Hawks with a 1,3,6 after another very tight finish.

With the Hawks just one win away, it was all to do for the US team and they looked to have the advantage going onto the final beat in a winning 2,3,4 combination, but the Hawks dug deep to put themselves back in contention. When one of the US boats was given a penalty for an infringement just 20 metres from the finish, the Hawks were able to snatch victory from the jaws of defeat with a 1,3,5 combination, to be crowned Wilson Trophy winners for the fifth time.

Other award winners during the weekend included Magdalen College who received the under 21 trophy, and Jamie Marston who was awarded the GJW Direct Outstanding Achievement Award for his tireless efforts in promoting team racing and the Wilson Trophy.

Three hundred seven races were run over the course of the two and a half day event which is an incredible feat. Next year will see the 70th Wilson Trophy and plans are afoot to make it even more special for the ‘Platinum’ anniversary event.